Back to all posts

Earlier this week I thought this post would open with an acknowledgement that I am an incredibly lucky person. As I write it, it looks pretty arrogant, but that's not how I mean it. I mean my life, as I've lived it, has proven to be pretty lucky. Incredibly lucky to the point of not always being able to explain how lucky.

Luck, coincidence, whatever you call it happened again this weekend when attending a wedding of a friend from the East Coast who now lives on the West Coast. Among the attendees of the intimate wedding? One of my college roommates, Jennifer Colliau, whom I hadn't seen in 20 years. It turns out that my friend who was getting married, had, of all places in the Bay Area, secured a job in a bar managed by my college roommate whom I have not seen for 20 years. This is the kind of coincidental circumstance that happens regularly for me. That's what I mean by luck.

Luck is a funny thing though, right? What is luck?  Interestingly, if you look up "luck" the defintion is not just positive:

That changes it a bit. Who wants to be lucky?? And of course, there are many who say success can only come with failure, so...right back around.

In any case, it was nice to see Jen. She's opening a bar across from The Fox Theater in Oakland soon. Will look forward to seeing some of you there!

I've had a weird dance with luck. I'm superstitious about it. I think I have to live in gratitude to have access to it, and I have fears of my life any time I think I may have jeopardized whatever weird luck I have.

Do you see this? The dichotomy?

On the one hand, I am very lucky. On the other hand, everything can and will fall apart unexpectedly.

On the one hand, I live in gratitude and can feel I am riding on an unseen current, effortlessly gliding to new and great things. On the other hand, my own imperfections - poor decisions made, or really even anything less than best decisions made - terrify me into thinking I will be disconnected from that luck.

It's not logical...in case you're trying to add it up.

Here's some luck and imperfection all in one. At this same wedding, placed in the woods (where kids play in the dirt), my son began to play in the dusty dirt and was soon covered head to toe in it. I didn't want to stop him and the environment seemed nurturing of a 3.5 year old being able to dig and play. It was a wedding in the woods and people were camping etc. Still, when a guest pointed out how nice it was to see a child play in the dirt, how they would never see that in the foreign country that they were from, I could only hear it as a comment on imperfection. His behavior and mine were imperfect. To someone. A stranger. I let it pass through my head and decided I had made the right decision, though I just wished it wasn't such dusty dirt. Now isn't that gross? An appearance closer to perfection would apparently have appeased my ego. I guess in a sense, I'm lucky it was such dusty dirt. There's no real mistaking it or glossing it over into something else.

Back on the luck side, in my son's dusty adventures he found three marbles in three separate locations in about a soccer field size area. I don't know if you've ever placed a glass marble in very dusty dirt, but it pretty much becomes invisible. Yet, he found not one but three marbles. (He also found one today in an unsuspecting location on the side of the road.) Pretty lucky!

Here's a weird thing...typing this all out makes me consider how these two - Luck and Imperfection - have been coexisting all along.

I am very lucky, and everything can and will fall apart unexpectedly.

I am imperfect, and I am still lucky, and everything can and will fall apart unexpectedly.

I had a moment last week where I remembered Suzanne Fiol. She's also on my jogging path with a street sign for SUZANNE. I miss her. If you didn't know her, this obituary says some good things: http://www.brooklynvegan.com/suzanne-fiol-is/ (I also love the URL for this: Suzanne Fiol Is)

I also can't believe the insane chaos that was endured when she passed. What a kind of lonely hell that was! So many people wanting to fulfill her dream and having only their versions of what she envisioned. Maybe that's the point, but it sure was hard. It's hard not to have someone to check in with. It's hard to challenge yourself to make the best decisions that are also the hardest decisions. It's hard to get along with other people! It's hard to trust. It's hard to be honest.

It's also hard to lead other people when you have no way of translating your gut, when you know luck, and when you know what direction to go in and need no map. Other people need maps, and you kind of have to provide them.

I know...talking in rambles here. That's how it goes this week.

Thanks for being here and thanks for listening.

P.S. This is Mama. Photo by Harrison Bulkley. 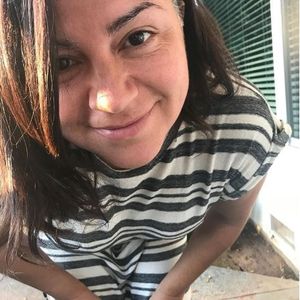